Tonight a friend offered to babysit the kids while we went out - our first choice was closed so we ended up in Dickson.
In the mood for Thai but with our planned restaurant shut we ended up at Thai Garden in Dickson (behind Zeffirelli). We had rice paper rolls which were quite nice, full of fresh herbs. For mains we had chicken with five herbs and beef rendang. the beef was very tender but lacking flavour, and i had the sneaking feeling it wasn't a made from scratch dish.
the chicken with five herbs was nice enough but not at all what i'd expected - i thought it would be heaps of fresh asian herbs tossed throughout the dish. instead there was a bare minimum of herbs cooked into the sauce, with a vague flavour of the dill the only recognisable herb.

the restaurant certainly seemed busy enough, particularly for takeaways, but it was a bit of a let down, so we won't bother again. 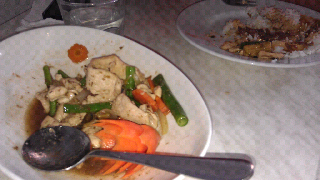 Email ThisBlogThis!Share to TwitterShare to FacebookShare to Pinterest
Labels: asian, eating out, review

Sometimes I think when people frequent a restaurant that they really have no idea how the cuisine should taste. It's not fair when you pay good money and get lousy food.

yes true. admittedly it was slightly cheaper than the other thai restaurants we have tried around town, but not that much...